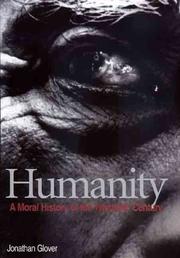 A Moral History of the Twentieth Century

An attempt to formulate a new ethics, based on human psychology, that will account for 20th-century atrocities and offer some realistic hope that they can be avoided in the future.

The mindless carnage of WWI, the totalitarian terror produced by Stalin, Mao Zedong, and the Khmer Rouge, and Hitler’s horrific drive for racial purity make reflections upon the 20th century an often-painful experience. Glover (What Sort of People Should There Be?, not reviewed) suggests looking beyond religious morality or the Enlightenment belief in a natural moral law for useful responses to such human depravity. He argues that a close study of human psychology provides clues about how normal people are led to willfully perpetrate evil on other human beings. The author believes that we are imbued with an innate respect and sympathy for other humans, which normally prevents cruelty between people. The identification of victims as subhuman (usually for ideological or racial reasons), however, manages to break down respect and sympathy—and almost guarantees an unleashing of human tendencies toward destruction and chaos. Glover supports his ideas effectively, with illustrations from most of the major conflicts of the century (including Vietnam, Hiroshima, Rwanda, WWI, the Cuban Missile Crisis, the Stalinist Soviet Union, China’s Cultural Revolution, Cambodia, and Nazi Germany). He also suggests that atrocities can be avoided by building a future society that places greater emphasis upon the positive characteristics of sympathy and respect. He thus recreates morality from the ground up, with its intellectual basis now firmly grounded in modern psychology. The author presents his argument for this new psychological morality in accessible, incisive, and provocative prose.

An impressive and accessible analysis of 20th-century brutality.