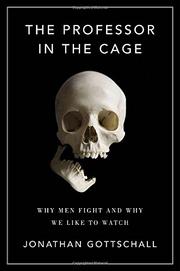 THE PROFESSOR IN THE CAGE

Why Men Fight and Why We Like to Watch

An English professor becomes a mixed martial arts cage fighter and then examines the history of human violence to justify the act.

This nonfiction account of literary scholar Gottschall’s (English/Washington and Jefferson Coll.; The Storytelling Animal: How Stories Make Us Human, 2012, etc.) dabbling in combat is something of a conundrum. On the surface, it’s the story of the author’s single MMA cage match, which lasted less than a minute. At a deeper level, the author seems to want so badly for the narrative to turn out like Fight Club. But despite the graphic descriptions of blood, bruises and gore, it reads much like an intellectual justification for ritual combat in society. Early on, Gottschall defends what he calls “The Monkey Dance”: “These events range from elaborate and deadly duels (pistols at dawn), to combat sports such as MMA or football, to the play fights of boys, to duels of pure language (rap battles, everyday pissing contests). They often seem ridiculous and often end in tragedy. But they serve a vital function: they help men work out conflicts and thrash out hierarchies while minimizing carnage and social chaos.” Unfortunately, the author is largely preaching to the converted. He touches on issues surrounding literature, politics, genetics and gender, he glories in the experience of a fight, even in its small moments—e.g., when he recalls a sparring match gone wrong. “The kick sank my teeth hard into my lower lip,” he writes. “I struggled on as my opponent pushed me into the fence and tried to drag me down. The flavor of the blood pulsing into my mouth was nauseatingly good….” These explicit descriptions and Gottschall’s fractured thoughts on “Blood Porn” or “The Great Semen Glut” tend to derail the book’s more thoughtful argument that a dueling society is a more civilized one.

A personal history of violence that makes Norman Mailer look nuanced by comparison.