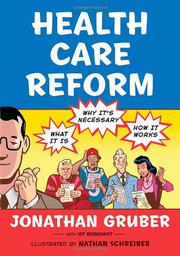 What It Is, Why It's Necessary, How It Works

by Jonathan Gruber with H.P. Newquist illustrated by Nathan Schreiber

A cartoon-driven examination of what’s wrong with the American way of health care—and why the legislative reform of 2010 was necessary.

“Every one of us knows that America’s health care system is a mess,” writes Gruber (Economics/MIT), who helped draw up the Massachusetts reforms for which Mitt Romney is now taking such a beating from the right. And for good reason: The hard right characterizes any kind of government management of health care as socialism, while others across the political spectrum believe that the unchecked profit motive assures that health care will remain expensive and differentially accessible. Gruber turns up some astonishing figures for which Schreiber’s accompanying illustrations carry an appropriate sense of alarm. For instance, in 1960 health care cost less than 3 percent of the federal budget, while the “largest single expenditure now is on health care,” likely to incur a deficit of $100 trillion—that’s trillion with a tee—in the near future. The author glosses over one obvious reason, namely the aging of the baby boom generation, while examining the big business that health care has become. By way of a pointed example, he considers what would happen to four very different people given the same medical emergency, namely a heart attack: Someone with decent benefits would be covered, while someone working on the fringe of the economy, as so many are these days, would pay most expenses out of pocket—and if he or she could actually get private coverage, it would be costly and incomplete. The Massachusetts plan, Gruber maintains, offers one cure, though the insurance industry has done all that it could to void the spirit if not the letter of the law. The omnibus health-care reform act that narrowly squeaked through Congress is a necessary start, but with more to do.

Timely and informative. Where was so clear an explication during the health-care brouhaha on Capitol Hill?