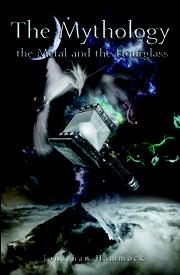 The Mythology, the Metal and the Hourglass

A reimagining of the story of Adam and Eve that provides a complex, harrowing vision of two characters’ struggles.

Alphason and his helper, Evere, frolic naked in a garden paradise. Alphason spends his time naming each creature he comes upon, as commanded of him by his creator, The Word. Meanwhile, the Tree of Life sustains them, creating new wonders from fallen fruit. The Word’s only condition is that they never eat from the Tree of Knowledge. As expected, however, a serpent appears (in this case, a limbed reptile), which entices them to sample the tree’s fruit, and soon their world tumbles into entropy. Later, the lizard returns, now as a fiery-haired conqueror called The Werd, who enslaves both of them. The Werd’s amnesiac followers soon join them: white-robed people called “fallen sand,” who have also betrayed The Word. The Werd eventually introduces lies to the world, as flaming swords crash to the earth and great white birds and a vicious leviathan threaten The Word’s forsaken children. Their only ally is The Ghost, a gigantic dog who watches and protects them from afar, and who provides particular comfort when Alphason is separated from his true love. Hammock’s debut isn’t a by-the-numbers retelling of the Abrahamic creation narrative; instead, it employs a nonlinear structure that first introduces readers to the lonely Alphason after his fall, as he inhabits a wasteland of snow with The Ghost. Overall, the novel’s lyrical prose style adds greatly to its parable-like tone. However, as the narrative moves chronologically backward and forward, it never settles into a straightforward retelling, and its sometimes vague manner of introducing characters may cause confusion. At times, unclear language (“The dog had left his stars and path behind and went to another place as did whoever was responsible for the footprints”) also muddles the story. Much of this tale is left ambiguous, as in its source material; however, the clear, direct biblical parallels become more difficult to discern after Alphason and Evere’s paradise is spoiled. This usefully distances the work from its better-known inspiration, but it also eliminates many familiar touchstones.

A novel that offers new flourishes on a spiritual mainstay but stumbles over its own attempts at ambiguity.

THE TALE OF PARADISE LOST
by Nancy Willard
Fiction