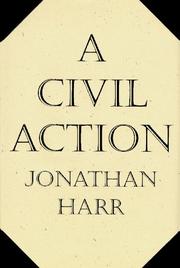 A crash course in big-bucks tort litigation, as rich as any novel on the scene. In the mid-'70s, the small industrial town of Woburn, Mass., found itself afflicted with a plague of biblical dimensions: 12 local children, 8 of them close neighbors, had died (or were dying) of leukemia. The parents suspected the water supply, which was foul-smelling, rusty, and undrinkable, but they had no hard evidence of a link to the cancers. But in 1979, the accidental discovery of carcinogenic industrial wastes in the town's wells led the grieving parents to hire personal-injury lawyer Jan Schlichtmann, new to the profession but intoxicated with the sizable damages he'd won so far. This is magazine journalist Harr's first book, but his complex portrait of Schlichtmann is the work of a master. Egomaniacal, quixotic, workaholic, greedy, altruistic, and naive, Schlichtmann is Everylawyer, and as he allows the Woburn case to consume his practice, he almost loses his license and his life. Harr wisely downplays the dying-children angle, focusing instead on Schlichtmann's case against the two corporate Goliaths who dumped the waste: Beatrice Foods (represented by Jerome Facher of Boston's Hale & Dorr) and W.R. Grace (represented by William Cheeseman of Boston's Foley, Hoag & Eliot). Despite their white- shoe lineage, Facher and Cheeseman play dirty, withholding evidence and repeatedly seeking Schlichtmann's suspension for having filed a ``frivolous'' lawsuit. But the real villain of the story is Federal District Judge Walter J. Skinner, whose personal dislike of Schlichtmann (and camaraderie with Facher) leads him to grant the defense's motion to split the trial into two protracted phases. By the time Judge Skinner submits four incomprehensible questions to be bewildered jury, Woburn's young victims have been forgottenand the whole legal system has suffered a tragic loss. A paranoid legal thriller as readable as Grisham, but important and illuminating. (Film rights to Disney)