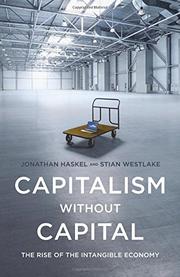 The Rise of the Intangible Economy

A searching, technical examination of the arrival of a kind of economy in which much of what is produced is abstract, symbolic, and speculative.

The economies of old, write London-based economists Haskel and Westlake, were founded on things that were actually manufactured and grown. Even if “the idea that the economy might come to depend on things that were immaterial was an old one,” the actual fact of such an economy has eluded precise description. For example, we lack the ability to measure certain aspects of a company such as Microsoft, whose market value a decade ago was $250 billion, but its physical basis—the value of its properties and equipment—was only about 1 percent of that. The “shift to intangible investment” has widespread consequences: it plays out in long-term inequality, infrastructure development, taxation, and other areas. It furthers what the authors call “secular stagnation” by allowing scalable firms to emerge that engulf and overpower competitors, as opposed to enhancing an economy based on the “spillover effects” of a high tide that raises all boats. The authors examine some interesting sociological points along the way—for one, that supporters of Brexit and other populist movements “score low on tests for the psychological trait of openness to experience,” such openness being key to symbolic analysis of the sort that advanced, intangible economies rely on. However, for the most part, their argument is based on hard economic data and trends, such as companies’ buying back stock in order to become private again, which allows them to operate without the same transparency required of public operations. In a closed economy, investing becomes more challenging, as does corporate financing; the authors examine trends in that direction as well.

An economics degree isn’t required to follow the authors’ nuanced argument, but it would surely help. Recommended reading for venture capitalists and investment counselors.