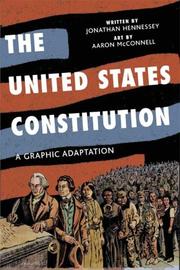 A searching interpretation of that sonorous document the Constitution, with cartoons.

Why have a Constitution to begin with? Because, remarks film and TV writer Hennessey—who, even if his prose is bound by balloons, turns out to be quite the Constitutional scholar—the founding fathers were keenly aware that civil rights were never formally written down in Britain, “and that deeply troubled the framers.” That’s as much of an establishing conflict as is needed for a superhero piece, and Hennessey, paired with artist McConnell, does a fine job of turning the making of the document, despite all the dull stretches in the Constitutional Convention that James Madison recorded in his diary, into a drama. Happily, Hennessey is aware of the truly radical origins of the Constitution, even as he notes its conservative strains. For example, he remarks that the system of checks and balances is a remarkable innovation, even if it sometimes seems that presidential actions—as with military intervention in Vietnam and elsewhere—go unchecked. In addition, laws are difficult to make in this country for very good reason: “Otherwise we might get too many of them.” Combining words and appropriate images, sometimes comic and sometimes earnest, the narrative visits such matters as the three-fifths law of determining apportionment, the writ of habeas corpus, eminent domain and conceptions of property and freedom of assembly and movement (for instance, the Articles of Federation forbade “vagabonds and paupers” from crossing state lines). Also covered are the many guarantees Americans take for granted—not least the Ninth Amendment, which states that certain rights not enumerated (“The right to scratch a dog behind the ears?”) shall not be denied.

A sugarcoated but undiluted vehicle for schooling American readers about their rights and responsibilities.