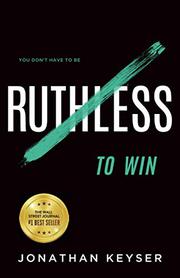 YOU DON'T HAVE TO BE RUTHLESS TO WIN

As the child of Christian missionaries living in Papua New Guinea, Keyser grew up helping those with even less than his parents had. After the family’s eventual return to the United States, his parents struggled financially, trying to survive on his mother’s meager salary as a teacher, but they still managed to give back to the community. The author soon left this benevolent world behind for UCLA, where he set his sights on making money. He eventually learned to lie “with sincerity” as a commercial real estate broker and achieved great success by misleading clients and stealing opportunities from co-workers—the norm in that business. But at a conference in Miami, Keyser was introduced to a radical idea that merged the triumphs he expected with the teachings of his childhood: a model for developing long-term relationships that could be based on selfless service to others. He soon began helping people with no expectation of reward or compensation and ultimately built a client base more robust and loyal than any that could be forged with back-stabbing tactics and traditional sales strategies. He has since taken this idea into his own firm and established himself as a “thought leader” in the industry, hoping to motivate others to take on his methods of service, “flat structure” (without traditional hierarchy), and an inclusive, caring company culture. The author wisely divides his book into two sections, the first being autobiographical and the second more of a guide to implementing his model. His personal anecdotes are succinct and revealing—such as the humiliating childhood moment when his principal realized he only owned one pair of jeans—and they all play into his larger argument for assisting others in order to help one’s business. The lengthier how-to section’s main arguments and buzzwords, like “being present” and “being disruptive,” become slightly repetitive, but Keyser complements his writing with extensive further reading lists and short, useful summaries. The tactics he has used in his own firm also go far beyond the world of real estate, touching on how gratitude, honesty, and service can improve just about any team dynamic.

Valuable, inspiring arguments for a more thoughtful approach to building a successful company.