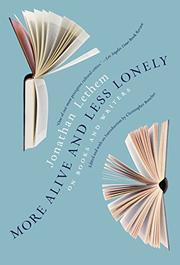 On Books and Writers

One of America’s most accomplished writers looks back between the pages of other writers' books.

Lethem (A Gambler’s Anatomy, 2016, etc.) is no stranger to books, between working in bookstores and writing regularly about them for venues like the New Yorker and Harper’s. Here, novelist Boucher (Golden Delicious, 2016, etc.) fondly curates a thoughtful and often sly collection of Lethem’s thoughts on books, films, and other works of art culled from the past two decades. The essays, reviews, and other ephemera are divided into sections, ranging from “Engulf and Devour” (books in the literary canon) to “Lost Worlds” (long-lost gems). One of the delights is Lethem’s personal voice, often laced with arch humor but absent the jarring postmodern irony that sometimes marks writers at McSweeney’s. The author also lacks literary pretension, tackling titans like Kafka, Melville, and Dickens but also penning tributes to Rod Serling and Batman. There are affectionate pieces about Walter Tevis’ obscure sci-fi novel Mockingbird (1980) and the late novelist Thomas Berger. Occasionally, there’s self-conscious commentary, as in Lethem’s footnote on Kazuo Ishiguro in which he admits he’s embarrassed by some of these pieces. He also offers a wonderful triptych of stories about Philip K. Dick, whom Lethem dubs a “necessary writer, in the someone-would-have-had-to-invent-him sense…American Literature’s Lenny Bruce.” There are some strange experiments—e.g., a feature written entirely in footnotes, the last of which reads “I’m not making any of this fucking shit up.” Another imagines an interview between the director Spike Jonze and the fictional character Perkus Tooth from Lethem’s Chronic City (2009). Fans may also enjoy Lethem’s encounters with writers he admires, ranging from affectionate memories of Philip Roth to a caustic encounter with Anthony Burgess.

A throwaway line from an essay on amnesia sums up this standout collection: “I followed the higher principle of pleasure, tried to end where I’d started: with writing I loved and wanted to recommend to someone else. That is to say, you.”