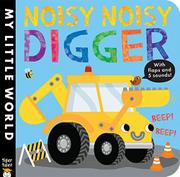 From the My Little World series

Each spread begins with the same two couplets: “Noisy Yellow Digger meets someone new. / ‘What is your name and what do you do?’ ” An orange crane, green steamroller, blue dump truck, and red bulldozer each reply, “I’ll show you what I do....” Behind a full-page flap, each truck uses simple, first-person language to explain its basic function in relation to the yellow digger. On the opposite side of the now-open flap cheerful construction-worker bears invite child readers to mimic each vehicle’s action. Opening the flap also produces a truck sound that plays briefly. (The book’s speaker is in the rear cover, so readers may need to take care not to muffle it.) A radio appears with all the vehicles on the final spread, and the flap opens to reveal the bears dancing. The sounds seem almost incidental; the book’s strengths are clear, consistent illustrations and repetitive language. For example, the scene changes with each page, but the digger is always the same, and details (a bee, butterfly, or cloud) shown on the closed page can be found in the same place when the flap is opened. Small print on the back cover cautions that the sounds are light-activated, which makes this a poor choice for bedtime.

Clean design and invitations to action will help young builders become readers—expect to find this book in the sand box or on the road rug.