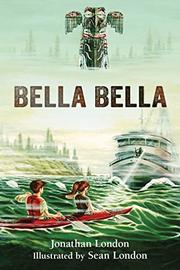 From the Aaron's Wilderness series

London (Foggy Goes to the Library, 2015, etc.) resumes the middle-grade adventures of his boating enthusiasts, this time along the Pacific Northwest coast.

Last year in Desolation Canyon, three Desert Storm veterans brought their teenage children together for a rafting trip down the Green River in Utah. Now 13-year-old Aaron and his dad rejoin Roger (and his 13-year-old daughter, Lisa) and Willie (who brings his 17-year-old son, Cassidy). They embark from the First Nations village of Bella Bella on a 10-day trip around Queen’s Sound, along the coast of British Columbia, in sea kayaks. Aaron is thrilled to see Lisa, on whom he has a crush. He’s less happy encountering Cassidy, since the former juvenile delinquent enjoys roughhousing with him and flirting with Lisa. Over 10 days, the group hopes to explore the coast’s many islands, see wildlife, and learn about First Nations tribes, like the Heiltsuk. It becomes quite a different trip when they hear gunshots one morning from a ship named the Sea Wolf. The Chinese fishermen are gathering geoduck clams, occasionally firing their guns to scare sea lions from the catch. After speaking with Wong, the diver, the group begins paddling away—and hears a thump and a cry within the Sea Wolf’s hull. Later, Aaron overhears the adults telling Cassidy that the ship may be transporting illegal immigrants from China to Vancouver. In this novel, London once again delivers an infectious blend of action, science, and tween romance to readers of all ages. The author’s son, Sean, also returns with gorgeous illustrations accompanying the narrative’s truly magical moments, like when orcas “swam right between our kayaks, their dorsal fins slicing the surface!” Aaron’s growing pains are visible not only regarding his crush on Lisa, but also whenever his father applauds Cassidy (Aaron thinks: “It was like a needle stuck in my skin hearing my dad praise him like that”). After presenting various opinions, the book addresses the central conflict of poor refugees seeking better lives thoroughly and compassionately. Aaron endears himself to audiences, not by being an awkward kid but a blossoming young man.

An impressive sequel about an aquatic journey that stands on its own while building on the first trip.