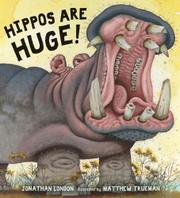 Hippos are huge, graceful and dangerous, as depicted in this colorful, informative book for the youngest naturalists.

From the cover image of a hippo’s gaping maw and the pink endpapers resembling the interior of the hippo’s mouth, readers understand that they will be immersed in details about the unusual creature. Bold claims about its characteristics and prowess appear in big type. The conversational narrative asks questions and directs readers’ attention. Additional fascinating facts appear in a smaller font. It begins with the declaration that hippos are HUGE: “They can weigh as much as fifty men,” or 4 tons. Hippos are fast on land and in water. They can bite a crocodile in half. And although children will undoubtedly giggle upon learning that bulls begin their battles by standing rump to rump batting balls of dung at each other (SPLAT! SPLOP!), the point that the fight can be ferocious is well-made. Mixed-media illustrations—which vary from double-page spreads to spot art—add to the free-flowing style and highlight the hippo’s mottled skin and mostly watery habitat.

The combined effect is a playful, clever introduction to the hippo that works for read-alouds or independent study.