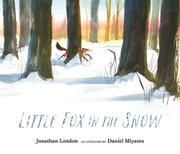 LITTLE FOX IN THE SNOW

In the snowy forest, a little fox is in turn the hunter and the hunted.

Opening on a young fox tucked safely inside his burrow, the second-person narration describes the fox’s day as he explores the snowy expanse, captures lunch, and surprises a wolverine, shifting the young fox from predator to prey. After a ferocious chase, the fox escapes and settles in to sleep, the narrator musing about the fox’s potential future as father to kits of his own. The tale unfolds in expressive free-form poetry. The short, evocative lines beautifully capture the dreamy stillness of the fox’s wandering, “lap[ping] tiny tongue-curls of icy cold water,” but deftly alternate with lines that burst forth with the urgency of the chase: “Little fox—you must go go go!” London’s fox is clearly wild, not a storybook animal, and Miyares doesn’t shy away from authenticity either, with the fox’s snacks shown realistically (though without gore). His painterly watercolors showcase the forest’s vastness and the rust-red fox, whose toothy gray shadow blazes against gleaming white snow. The fox exudes dignity and complexity, with the agile animal breaking the frame of an action-packed hunting page but also presenting as tiny and imperiled when pursued. While the story itself is a tad slight, words and art effectively convey the fox’s fluctuating role in the forest ecosystem.

An ideal introduction to nature’s complexities, wrapped up in an unexpectedly poetic package.