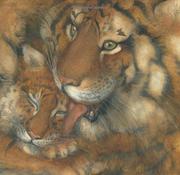 In lyrical free verse, nature-writer London gives readers a tiny peek into the lives of a Siberian tiger cub and his mother.

“A river in its icy bed / mumbles in its sleep. / The wooded hills and ridges / sparkle with snow. / Shaggy and frost-tipped, / the tigress and her cub / slip like shadows into a forest / of bone-white birches.” As Spirin’s artwork gets darker and takes on the blue-gray of night, the Striped One hides little Amba under a fallen tree so she can hunt the sika deer in the clearing. But as she is crouched to pounce, the forest erupts into flames, and all the animals flee. All night the mother searches for and calls her cub, but his cry can only be heard with the calming of the wind and fire. Spirin’s watercolor, pastel and gouache artwork neatly complements the images painted in London’s text. Only twice does he anthropomorphize the expressions on the tigers’ faces. The forest fire, though obviously a threat to the forest dwellers, is not vividly portrayed, so readers are unlikely to be to frightened. An author’s note provides more information about endangered Siberian tigers, including the threats to their survival.

A beautifully written episode with a strong conservation message.