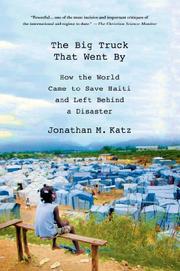 THE BIG TRUCK THAT WENT BY

A top-notch account of Haiti's recent history, including the January 2010 earthquake, from the only American reporter stationed in the country at the time.

Katz broke the story of how the deadly cholera outbreak, which spread in the months after the earthquake, was brought to the region by infected Nepalese U.N. peacekeepers and spread by inadequate sanitation. In his debut, the author chronicles his many investigations during his years living in and writing about Haiti. Unlike coverage by other writers on the island's recent history, Katz's recounting of the earthquake disaster, and the international mobilization that followed, is part of an ongoing story. This account complements those of others who have written of their direct experiences with the aftermath of the earthquake, but Katz’s position on the ground when the disaster struck makes this book unique—“it allowed me to understand both sides of the divide, between those who seek to improve how aid is given, and those who have been trying to improve their own lives for so long.” His contacts and local knowledge gave him special insight into the way the relief operation developed. Katz shows in detail how well-meaning actor Sean Penn (who lacked expertise) fed media hype about flooding dangers and diphtheria scares, which got in the way of efforts by qualified experts such as epidemiologist Paul Farmer. The author reports how promised aid funds didn't arrive and NGO relief funds were misspent, while Haitians, presumed to be corrupt, were shut out of involvement in relief efforts. He also examines the involvement of the Duvalier clan.