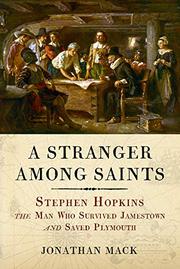 A STRANGER AMONG SAINTS

How a little-known member of the Plymouth settlement made a significant impact on its success.

Attorney Mack, a member of the General Society of Mayflower Descendants, makes his book debut with an absorbing, perceptive biography of Stephen Hopkins (1581-1644), who made two voyages from England to the New World. As the author argues convincingly, he proved to be “a key figure in the Pilgrims’ struggles and triumphs.” Hopkins sailed first to Jamestown in 1609, remaining there for a few years. In 1620, he joined the passengers of the Mayflower: the Saints, bound by religious covenant, and the dissident Strangers, Hopkins among them. Because he left no diary or journal, Hopkins has been neglected by historians, overshadowed by his contemporaries Myles Standish and William Bradford. But Mack makes judicious use of evidence to create a nuanced portrait of a complex man—independent, intelligent, “stubborn when he felt wronged”—who took an influential role, bringing to decisions wisdom gleaned from his earlier experiences. Those experiences were dire: Shipwrecked off the coast of Bermuda in 1609, Hopkins became mired in scandal, accused of mutiny, and sentenced to death. He escaped to Jamestown, where he found himself “on the doorstep of hell”: The town was in ruins, the population decimated by starvation, and relationships with Native peoples were tense. The author creates a visceral sense of the hardship of settlement and of trans-Atlantic crossing, when ships were at the mercy of doldrums or tempests. “The wooden ship groaned and creaked,” he writes, and in the dark living area, “the smells of 150 unwashed people and rotting food intensified.” Many died during the voyage. The survivors, their food stores perilously diminished, landed on cold, inhospitable terrain, and attack by Indigenous tribes seemed probable. Because he had advocated for diplomacy with Natives in Jamestown—where he had met Pocahontas—Hopkins, “a cool thinker,” pressed for conciliation and peace. His success in developing rapport and forging bonds between Pilgrims and Natives opened “the door to the prospect of prosperity that came with peace.”