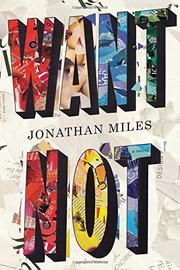 In a novelistic stratagem that has become increasingly prevalent in recent times, several characters relay the narrative until their voices and paths coalesce, more or less neatly, at novel’s end. In Miles’ version, the convergence is somewhat less wieldy but no less enjoyable. Elwin Cross Sr., an octogenarian historian now confined, due to Alzheimer’s, in a nursing home on Henry Street in Manhattan, is stuck on page 235 of his treatise on genocide as a byproduct of civilization. Elwin Cross Jr. is a linguist who has been summoned to assist in a federal project to devise a warning sign (for a nuclear waste dump) that humans will still understand 10,000 years hence. This presents a conundrum because Cross Jr., whose specialty is language death, knows that no mere verbiage can survive that long. Micah, a dreadlocked 20-something nature child who was raised in the wilderness by a religious fanatic, has brought her lover, Talmadge, from Burning Man to a squat near Henry Street, where they Dumpster-dive for all of life’s necessities. Their idyll is threatened when Matty, Talmadge’s skateboarding best friend from Ole Miss, shows up fresh out of prison. Sara, whose trader husband died on 9/11, was robbed even of the consolation of grief when she learns of the torrid affair he was carrying on. Since marrying the unscrupulous and sexually insatiable Dave—who has profited hugely by collecting from the country’s most vulnerable and gullible debtors—Sara has grown increasingly alarmed by the cynical affinity Dave has cultivated with her teenage daughter Alexis. Emotionally stunted by her father’s erasure from her life, Alexis may be pregnant but doesn’t want to know for sure. Tethered by the sheer weight of back story—each of these characters could merit a whole novel—and disquisitions on disposables of every kind, the novel eventually achieves exhilarating liftoff.

For readers who relish extravagant language, scathing wit and philosophical heft, this book wastes nothing.