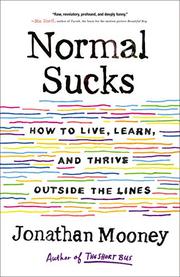 How To Live, Learn, and Thrive Outside the Lines

A challenge to rethink “normal.”

When Mooney (The Short Bus: A Journey Beyond Normal, 2007, etc.) was a child, he was “diagnosed with multiple language-based disabilities and attention deficit disorder. When the educational psychologist broke the news to my mom and me, it was as if someone had died.” For years after, the author struggled to conform to whatever concept of “normal” he thought would help him fit in and stop feeling like a “weird kid.” In this sometimes-humorous and thought-provoking analysis of his childhood, adolescence, and college years, Mooney shares what it was like to be different from the norm, which he astutely points out “is a false standard for human value.” He provides an extensive history of how the idea of normal evolved, giving readers an eye-opening look at the standards we are often forced to live with, whether we know it or not—and whether we have learning disabilities, physical and/or mental disabilities, or in some other way do not fit the traditional picture of normal. Some of the historical research the author cites is horrifying, such as the sterilization techniques and lobotomies used on those with mental disabilities. Mooney discusses the rise of eugenics and how Hitler adopted these ideas for his own Final Solution. He expertly brings the conversation back to a more personal level when he shares how, with the help of a friend, he began to accept his differences and embrace his neurodiversity, wrote a book, and then gave lectures on the benefits of neurodiversity. He touches lightly on the current ideas about the benefits of neurodiversity in society; some readers will wish this section was longer. Throughout, the author encourages readers to reexamine the concept of normality and to embrace the idea that all humans have something to offer society.

A new, engaging, and informative perspective that redefines what “normal” should really mean.