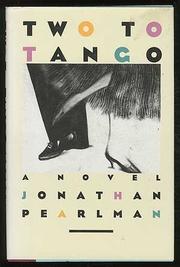 Shticks and moans: the slight, familiar midlife crisis of 38- year-old actor Benjamin West—an overgrown adolescent who can't make the Big Commitment to his girlfriend. The one somewhat distinctive element in Ben's half-jokey, half-maudlin narrative is that he recently helped his ailing father to commit suicide (pills and a plastic bag). But first-novelist Pearlman doesn't treat this subject with any depth or nuance—it's just one more thing for Ben to kvetch about. And the other bits and pieces here are standard, vaguely dated fare. Ben, who's had success on a TV series, wonders whether or not to audition for a new Mamet play on Broadway. He tries to pick up a girl in a bar with such suave lines as ``I love the way your skirt hugs your ass.'' He recalls his Brooklyn childhood, masturbation, early sexual experiences. He visits the house where his parents lived— and imagines that the dead mother and father have returned for a cute-sentimental chat with him. He learns that his brother in Chicago has testicular cancer. And, primarily, he resists pressure from girlfriend Jessica to settle down, grow up, get married, make a baby—until intimations of mortality finally (in a stick-on happy ending) end Ben's serious case of arrested development. Pearlman comes up with a few bright lines, and the show-biz atmosphere occasionally rings true. Otherwise: a limp mixture of generic Jewish-family material, weak X-rated stand-up comedy (with a misogynistic edge), and unpersuasive coming-of-age dramatics.