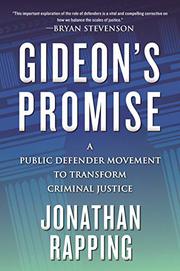 An indictment of the U.S. criminal justice system, which treats the majority of defendants as ciphers—or worse.

Rapping, a public defender who has received a MacArthur award for his pioneering work, explains how his career has led him to spearhead much-needed reforms. After struggling against recalcitrant judges, prosecutors, and even fellow public defenders in numerous jurisdictions, the author decided that the path to meaningful change for indigent defendants would need to come from public defenders themselves. Throughout the book, filled with detailed case studies of justice gone awry, Rapping describes the heavy caseloads and lack of funds with which most public defenders struggle, which means that their clients receive almost no attention. Rather than seeking courtroom trials for clients, besieged public defenders accept plea bargains for defendants without even exploring the possibility of an acquittal or a reduction of a prosecutor’s charges. “The prosecution,” writes the author, “has developed a formidable arsenal…to coerce people into giving up the protections at the heart of our justice system, and now only one in twenty Americans convicted of a crime even experience a trial.” The method Rapping devised emphasizes a “client-centered defense,” in which men and women represented by public defenders are more than just a case on paper and are “treated with dignity in the system.” The approach morphed into an organization called Gideon’s Promise, named for Gideon v. Wainwright, in which the Supreme Court ruled that the state must provide an attorney to those who cannot afford one. As Rapping documents, state legislatures, prosecutors, and judges have often resisted the intention of the court ruling, leading to countless travesties. Rapping tellingly quotes one judge who saw through the resistance: “While we all may not be able to agree on what justice looks like, surely we can agree on what injustice looks like.”

Useful reading for anyone interested in helping to change a deeply flawed system.