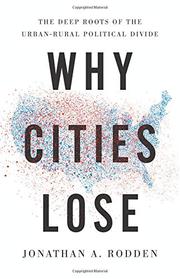 The Deep Roots of the Urban-Rural Political Divide

by Jonathan A. Rodden

The enduring importance of geography in American politics.

Many argue that partisan gerrymandering causes cities to lose to rural areas in countywide, winner-take-all elections. That is too simple an explanation, writes Rodden (Political Science/Stanford Univ.; Hamilton’s Paradox: The Promise and Peril of Fiscal Federalism, 2005). Much more important is the geographical location of a political party’s base. In many states, urban areas are largely Democratic. The Democrats often win majorities there but fall short in pivotal districts outside the city that decide control of Congress and state legislatures. In this data-dense book, the author takes a deep look at the familiar urban-rural political divide, examines its implications for democracy (not good), and suggests ways to reduce polarization. He also shows how similar patterns affect elections in other Western democracies. In an intriguing section, he traces the roots of the American divide to the era of labor unrest before World War I, when left-leaning workers lived in urban working-class neighborhoods. In industrial Reading, Pennsylvania, they could win majorities in urban city council wards but found it harder to achieve victory in wards with more white-collar workers and business owners. Today, with the rise of the knowledge economy, this “pattern of political geography” continues even though city residents are now a far more heterogeneous collection of urban interest groups (working poor, immigrants, young progressives, etc.). Democrats cluster in “growing, affluent city centers like Seattle and San Francisco, as well as in smaller knowledge-economy hubs like Durham and Ann Arbor.” They fight “a perpetual battle for the party’s soul,” pitting firebrands against those trying to soften the party’s reputation to win rural votes. “A victory for the left is a victory not only for the urban poor…but also for universities, laboratory scientists, and social progressives,” writes the author. As Rodden argues, only electoral reform—a switch to representation in proportion to overall vote share—or major demographic shifts can reduce the underrepresentation of urban interests.

Valuable for specialists and political journalists.