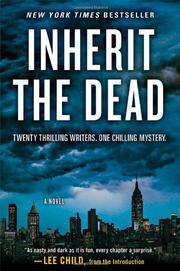 In a follow-up, though hardly a sequel, to the round-robin novel No Rest for the Dead (2011), 20 authors team up to track down a missing heiress and raise money for the victims’ support group Safe Horizon.

Angelina Loki couldn’t have picked a worse time to run away from the home she shares with her father, nonpracticing lawyer Norman Loki. Little does Angel know that in two weeks, when she turns 21, she’s set to split a mammoth trust fund with Norman’s ex, neurotic socialite Julia Drusilla—if she signs the appropriate papers that very day. Editor Santlofer shows Julia hiring private eye Pericles Cristo, who was framed and forced out of the NYPD, in his capable opening chapter. From that point on, routine is the order of the day. The story is so familiar and the chapters so short that the star-studded roster of authors would have to struggle to endow their contributions with any originality, and most of them settle for keeping the ball in play. Some of them introduce new characters for Perry to question; some of them don’t. James Grady, Dana Stabenow and C.J. Box take it upon themselves to develop the plot; Heather Graham, Marcia Clark and Val McDermid wallow in genre clichés. The episodes, interrupted periodically by anonymous snippets from the criminal’s point of view, are so formulaic that even though Ken Bruen and Max Allan Collins sound just like they always do, Perry’s whole skein of conversations—you can hardly call them adventures—are readily integrated into a seamless story whose only problem is that it isn’t very interesting.