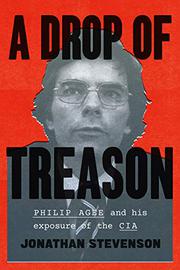 A DROP OF TREASON

Philip Agee and His Exposure of the CIA

One of America’s “most hated” spies receives a lively, thoughtful biography.

Stevenson, senior fellow for U.S. defense at the International Institute for Strategic Studies, has searched the archives and interviewed everyone willing to talk about Philip Agee (1935-2008). The son of a wealthy Catholic businessman, he seemed a chip off the old block, attending Catholic school and Notre Dame, where he graduated cum laude in philosophy. In 1956, during his senior year, he declined an offer from a CIA recruiter but joined after three months of law school. Agee served in Ecuador, Uruguay, and Mexico, carrying out America’s policy of fighting the influence of Castro and communism by supporting authoritarian movements and their violent methods. No evidence exists that he objected at the time, and his 1968 resignation letter cites only personal reasons. He remained in Mexico for several years, seemingly at loose ends. In 1971, he traveled to Cuba, ostensibly for research, and then to Paris, where his statements denouncing the CIA caught the agency’s attention. His 1975 bestseller, Inside the Company, was a generally accurate portrayal of CIA operations and bad behavior accompanied by the names of more than 400 CIA agents. Although it remains an article of faith among CIA supporters that agents died as a result, Stevenson expresses doubts—but there is no doubt that it ruined careers and hampered missions. The author devotes two-thirds of the book to the remainder of Agee’s life as a professional CIA critic, constantly fending off enraged officials who proclaimed that his defection was a facade of “venality, lust, drunkenness, or emotional breakdown.” The 1970s were not kind to the CIA, but Congressional anger at its dirty tricks caused more damage than insider revelations. By the 1980s, America’s conservative turn had relieved the pressure, and 9/11 reenergized the agency. “Once 9/11 effectively reempowered the agency, and it went nefarious again with renditions, black sites, and torture,” he writes, “[Agee’s] mission again became relevant to upholding true American principles.”

An insightful and evenhanded portrait.