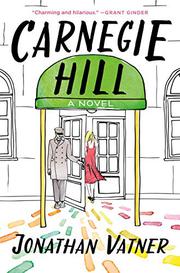 The secret lives of the board members and service staff of a stuffy old apartment building on the Upper East Side of Manhattan are full of drama.

Upon moving into the Chelmsford Arms with her rich, handsome, but oddly irritating asset manager fiance, Penelope "Pepper" Bradford takes a position on the building's board in hopes of meeting people and developing job prospects better than answering phones in her mother's friend's third-tier art gallery. She is the youngest person by far on the board, a coterie of moth-eaten old farts ruled by the ancient Patricia Cooper—"Empress Pat. The Czarina. The Duchess of Carnegie Hill"—and her crazed Pomeranian, with assistance from an elderly housekeeper who is the only African American in the building save the young gay porter, Caleb. The board's main function seems to be to preserve the all-white, no-children makeup of the building, to ensure that none but a short list of overpriced, incompetent contractors ever crosses the threshold, and to prevent tap-dancing, parakeets, and other violations of decency. Despite her early doubts, Pepper becomes close with several of her neighbors. Francis (a philosophical and literary Jewish man) and his wife, Carol, have hit a rough spot in their marriage of 50 years, as have George and Birdie (retired boss and secretary from Montreal), and serious health and mental health issues are cropping up everywhere. As Pepper prepares for her wedding to Rick—and then recovers from it—she can find little inspiration for her long-term marital prospects. The only happy couple in the building is made up of two men, the porter and the doorman, and they are so deep in the closet that nobody knows it. By the end of the book it's time for another board election; Patricia's reign of "corruption and thievery" may be over at last. She appears "holding her sleeping Pomeranian like a muff," wearing "a long red douppioni-silk coat embroidered with dragons"—ready to do battle. Will the Chelmsford Arms and its residents move at last into the 21st century? Vatner's debut novel is absorbing and comforting in its omniscient perspective and delicate handling of its carousel of characters.

A good old-fashioned read on the venerable theme of marriage.