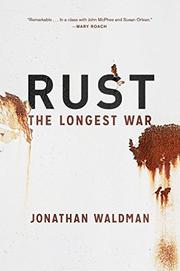 How the world turns to rust.

Oxidation occurs on everything made of metal, corroding cars, boats, trains and planes and causing bridges to fall and washing machines to explode. Rust, journalist Waldman writes in his sprightly debut book, “represents the disordering of the modern” and has an impact on “our health, safety, security, environment, and future.” It’s a human enemy, battled throughout history by a cast of inventive, often quirky men and, occasionally, women. Take Harry Brearley, born in 1871, a self-taught British chemist with no patience for scientists’ “bluff and bunkum.” He was “curious but opinionated, flexible but intolerant, innovative but persnickety, knowledgeable but overconfident, and determined but obstinate.” His determination led to his invention of a process to make steel that would not corrode; someone else marketed it as stainless steel, and it revolutionized the production of cutlery, machinery and weapons. Rust can also be beautiful, Waldman learns from Alyssha Eve Csük, “the country’s preeminent rust photographer,” who spent years documenting Bethlehem Steel Works and its demolition. Her images of rust evoke comparisons to “a forest, leaves in snow, a nebula, an amoeba.” John Carmona, “rust’s Johnny Appleseed,” started selling rust removal and prevention products from his garage in Fitchburg, Wisconsin, and a few years later expanded into a 10,000-foot warehouse, carrying 250 rust products. Surprisingly, the author discovered, colleges offer few courses on corrosion for materials science and engineering majors. Nevertheless, some 15,000 corrosion engineers are at work in the United States, in oil and gas industries, transportation and utilities. One small New Jersey company developed a polymer stronger than steel for use in bridges and buildings, and some corrosion engineers work on developing biomedical implants.

Waldman is a bright and curious companion in this lively adventure in search of the scourge of rust and its ingenious opponents.