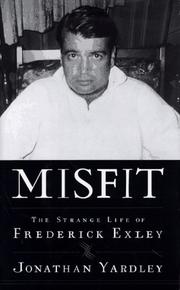 The Strange Life of Frederick Exley

The rise and fall of a one-book wonder, told by the Pulitzer Prizewinning Washington Post literary critic. If Exley's raucous ``fictional memoir'' of failure, fame, and football, A Fan's Notes, is a cult book, then Yardley (Ring: A Biography of Ring Lardner, 1977) has been a steadfast apostle. Since its publication in 1968, he has promoted it in his newspaper writing and written an introduction to the Modern Library edition (to be published simultaneously with this biography). He was also a distant friend to Exley, ``the most elusive and mysterious of men,'' a charming and exasperating ne'er-do-well, sponger, and barstool-propping man of letters. Despite this relationship, Yardley proves tough and objective in re-creating Exley's life, which differs little in substance from A Fan's Notes. Exley (192992) was the feckless younger son of the local football hero of Watertown, a small upstate New York burg. This might have been the son's only claim to fame had he not written a book that Yardley ranks alongside Invisible Man and The Adventures of Augie March for its evocation of a young man's disaffection with the American Way. A Fan's Notes apart, the biographic trail is scant in the early years, but Yardley connects Exley's departure from mainstream life not only to his father's early death and his failed romance as an adolescent with a WASP debutante, but also to a car accident that ended his own mediocre football career and presumably gave him a taste of mortality. As much as he is a fan of Exley's debut, he dismisses as ``honorable failures'' his later Pages from a Cold Island and Last Notes from Home, which follow the self-mythologizing, vagabond contours of Fitzgeraldian romanticism and Hemingwayesque machismo in chronicling Exley's alcoholism and failed marriages. Misfit adds a dark, factual foundation to Exley's one lasting book. (photos, not seen)