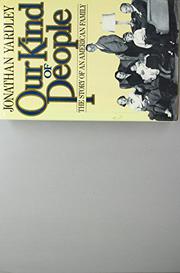 OUR KIND OF PEOPLE

The Story of an American Family

Leisurely paced and earnestly revealing, this proper, well-proportioned book memorializes the Yardleys, the author's own family, re-creating the family history by drawing on personal memory and the extensive contents of a file his parents kept for 50 years. Yardley's father Bill was a girls' school headmaster who studied for the ministry to further his academic career; crusty, disciplined, and well-mannered, he had aristocratic pretensions but also cared deeply about books and the girls of Chatham Hall. Helen, the author's mother, was in Bennington's first graduating class; marrying soon after, she apparently shelved plans for an art career to become the headmaster's wife and raise four children, acknowledging some bitterness over the choice only late in life. The two shared a love of fine things—some pieces of furniture seem like beloved members of the family—and a continuing recognition of their silver-plated circumstances: never having quite enough money, beholden to people who had much more. Yardley justly likens them, especially his father's clan, to "characters from a Marquand novel," for in their aspirations and pretenses, their coded public behaviors and more relaxed private styles, their strongly expressed convictions and old prejudices, they indeed resemble that novelist's genteel WASP creations. Appreciating the subtleties and contradictions in their personalities, Yardley is able to separate small posturings and tiresome quirks from true qualities of character, all the while remembering his own unique position here—an insider trading on family stock. Traces of his varied legacy are apparent in his handling of certain subjects, such as sickness or divorce, as well as in the sure cadences of his formal, fluent prose. Although much of this narrative is diverting—the Pulitzer Prize-winning critic (1981) deftly captures habits and attitudes—it has weaknesses that even his kind of people won't value: too much emphasis on school rituals and the family finances especially. As a record of a particular way of life, however, it is both faithful and emblematic.