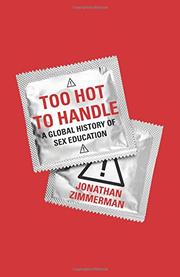 TOO HOT TO HANDLE

A Global History of Sex Education

A chronological narrative of sex education around the world.

Using extensive research backed by an impressive notes section, Zimmerman (Innocents Abroad: American Teachers in the American Century, 2009, etc.) untangles the complex history of how and why sex education was first introduced as a specific subject to be taught in schools and its subsequent rise and fall as a teachable course over the past 100 years. First proposed in the 1920s as an attempt to stem prostitution and venereal disease, sex education in Western schools used "models and metaphors from the animal world" to "communicate the ‘facts of life’ while simultaneously discouraging human sexual activity outside of marriage." Globally, however, this taboo subject was rejected by those with Catholic backgrounds and those who felt such a personal subject could be taught only within the family. Over time, the inflexibility of various nations receded, allowing students to receive sex education worldwide, although it was often disguised under "new euphemisms: social hygiene, human relations, character education, marriage and family education, or—most commonly—family life education.” Zimmerman elaborates on the push and pull of legislators, parents, religious leaders and students; most wanted basic sexual information to be disseminated without actually encouraging sexual activity or promiscuity. The narrative covers the time frame of the sexual revolution of the 1960s and ’70s, the discovery of HIV/AIDS, which prompted renewed efforts to explain the sexual activities of humans, and the problems teachers faced as they juggled the need to teach this controversial subject with their own lack of knowledge and the desires of parents who did or did not want their children to learn the details from someone outside the family. Zimmerman's coverage includes the tactics of the United States, European countries, New Zealand, China and Japan, as they've all tried to maintain a delicate balance of providing just enough information without revealing too much.

An informative, occasionally dry account of the attempts to educate the world about human sexual relations.