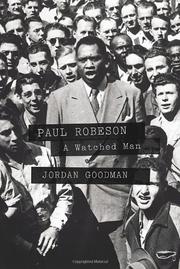 The story of the U.S. government’s persecution of entertainer and peace advocate Paul Robeson.

In his latest work, Goodman (The Devil and Mr. Casement: One Man's Battle for Human Rights in South America's Heart of Darkness, 2010, etc.) recounts the life of Paul Robeson (1898–1976), “one of the most famous African Americans of the twentieth century.” Though he was initially most well-known for his rendition of “Ol’ Man River,” among other tunes, Robeson soon began employing his voice not merely for entertainment purposes, but also to share with the world the truth of America’s social injustices. While in Paris, the communist-leaning Robeson remarked that it was “unthinkable” that African-Americans “would go to war on behalf of those who have oppressed us for generations.” His remarks were poorly received back in America, where both the African-American and white presses placed Robeson squarely in their cross hairs. The U.S. government was equally perturbed by what they deemed to be his disparaging remarks; as a result, Robeson soon found his passport revoked. Newly grounded, the controversial figure remained a lightning rod for civil rights, and much to the government’s chagrin, all attempts to silence him only managed to further the reach of his voice. “They can keep me from going overseas,” Robeson remarked in a 1957 Ebony interview, “but they can’t keep news of Emmett Till and Autherine Lucy from going over.” Goodman’s meticulous research provides the underpinnings for a compelling story, though his propensity for the tangential often distracts more than contributes. While Robeson’s story is indeed engaging, the author’s inability to bring the man to life keeps his carefully researched work from hitting the perfect note.

A fact-driven, scholarly account that lacks slightly in narrative drive.