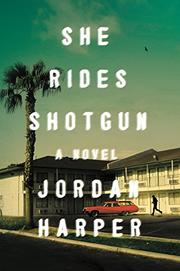 In his first novel, Harper returns to the seamy criminal fringe he explored in his story collections (Love and Other Wounds, 2015, etc.) for a grim yet moving tale about an ex-con’s efforts to protect his young daughter.

Meek, intellectually precocious 11-year-old Polly finds her tattooed, heavily muscled father, Nate, waiting outside her school in Fontana, California. Having been in prison for more than half of Polly’s life, Nate has now been granted an early release. Unfortunately, though, the head of the Aryan Steel gang has just put out a call from his prison cell for his gang members to kill Nate, his ex-wife, and their daughter. Polly’s mother is knifed before Nate can reach her, but he takes Polly on the run to evade hit men while planning how to stop the vendetta. His love for Polly overpowers and empowers him, but there is no sentimentality here—he recognizes with paternal pride that she shares his “buried rage.” He trains her to fight, then takes her along when he robs stores and attacks his Aryan Steel enemies. Although she remains attached to her teddy bear, Polly discovers she takes after her badass daddy more than she or he imagined. The novel combines striking images, like Nate’s “gunfighter eyes” and the “old man of a car” he shows up driving, with disturbingly raw violence—a drug mule gutted by a crooked sheriff to get out the merchandise, the same sheriff gouging out an eye. Even more disturbing are the characters’ raw emotions: after witnessing Nate hold an Aryan Steel member’s back against the coals from a barbecue-grill fire until he gives desired information, Polly finds herself smiling. Yet there is a moral core here. Acknowledging that his vengeful behavior is “dumb and selfish,” Nate knows he isn't good for Polly. And despite her developing toughness, Polly retains her urge to save the innocent.

For all the darkness and even ugliness displayed, the characters’ loyalty, love, and struggle for redemption grip the reader and don’t let go.