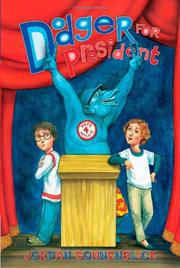 Fifth-grader Willie Ryan makes the mistake of leaving his ex-genie, invisible blue-chimp buddy Dodger unsupervised and ends up having to run for student-council president against ruthless and popular James Beeks. Willie’s best human friend, Lizzie (who can also see Dodger), can’t keep them out of the election and ends up on the ticket as VP. Dodger’s help is usually anything but helpful; to make matters worse, James’s VP is class tough-guy Craig, and Willie’s second-grader sister Amy is determined to get to the bottom of every strange occurrence. The second in Sonnenblick’s short-on-logic, light-on-laughs series will please those who enjoyed the first. Dodger is back with his magic of convenience and his scattershot surfer patois, as is his thesaurus-tongued brother Rodger. None of the characters has much depth or sounds like children from this decade, but Willie’s sarcastic narration can be mildly entertaining. An epilogue sets up a third installment, but that doesn’t make the lack of a resolution to the election in this installment any more satisfying. A secondary purchase at best. (Fantasy. 7-11)