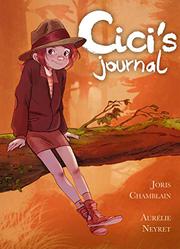 From the Cici's Journal series, volume 1

In this cleverly illustrated story, readers meet 10-year-old Cici, who lives with her mother in a picturesque village with friends. An avid diarist, she wants to be a writer when she grows up. One day, while in the forest treehouse she has built with her best friends, she spies an unusual sight: a mysterious older man, accompanied by a parrot, carrying paint cans through the forest. She and her friends set out to figure out both the man’s identity and his secret, hidden deep in the forest behind a looming stone wall. What follows is a tender story involving a zoo, animals, helping others, and the powers of art and kindness. Curiosity, imagination and teamwork take center stage. Most characters, including Cici, present White, though characters of color are present in peripheral roles. While Cici’s story is told primarily by a third-person narrator, the text’s key visual innovation is to periodically insert illustrated excerpts from Cici’s diary as well as newspaper clippings and photographs of events in the story. The final pages include a space for readers to contribute an illustration. While the clunky, at-times saccharine dialogue might be off-putting to some, the colorful and charming mystery at the center of the text will render this infelicity inconsequential for most.

May have younger readers beginning their own writing, painting, or scrapbooking adventures.