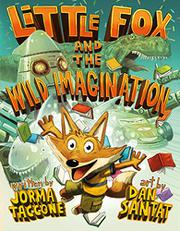 LITTLE FOX AND THE WILD IMAGINATION

Beware the imagination that cannot be contained.

When Poppa Fox comes to pick his son up after school he finds Little Fox a complete grump. Happily, Poppa Fox knows just the way to perk up his kiddo. One minute they’re pretending to be race cars, the next they’re dinos on the bus, and then later they’re blasting off to outer space to grab some ice cream. Unfortunately, all that sugar before dinner means that Little Fox’s imagination is now primed to go haywire. Now he’s a robo squid destroying a broccoli forest (rather than eating his dinner), then a shark devouring his dad, who is driving a mail truck (that is, splashing way too much in the tub). Things calm down by bedtime, but when Poppa Fox tells his son he will pick him up again the next day, Little Fox already has big plans. As books built on the power of imagination go, this story starts out strong but loses steam about the time Little Fox loses his focus. Santat’s art does more than its fair share of the heavy lifting, particularly when Little Fox’s imagination is supposed to go off the rails. Madcap adventure never looked this fun. Yet the book can’t quite nail the landing, shifting tone from one page turn to the next, leaving readers ultimately unsatisfied. (This book was reviewed digitally with 11-by-17-inch double-page spreads viewed at 33.8% of actual size.)

Aims high but just doesn’t get there.