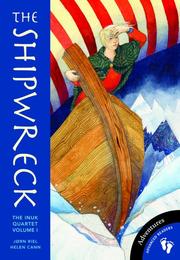 From the Inuk Quartet series, volume 1

When Leiv, a Viking boy, is shipwrecked near Greenland, two Inuit siblings, Apuluk and Narua, rescue him and eventually bring him to their community.

In 1000 C.E., Norsemen traveled to Greenland, but there were few contacts with the Inuit community. At first, the Inuits want nothing to do with Leiv, but because he demonstrates that he knows some of their language and seems peaceful, they accept him. This is a harsh adventure tale: Leiv loses several toes due to frostbite, and Apuluk is attacked by a polar bear. From its opening scene of a blood feud started by Leiv’s father’s killing and the rigors of Arctic life, the characters act as adults despite their adolescent ages. The Inuit life is idealized, in comparison to the warlike, possession-hungry Norse culture. Narua is portrayed as a fearless young woman, but then she only wants a needle when the three young people find the Norse settlement near the end. Is Riel’s message a little heavy?  Heavily illustrated with full-page bold, stylized watercolors, some double-page spreads and occasional vignettes, this transitional chapter book employs a large font and very generous white space.

Although the language is a bit stilted and the message far from subtle, this Danish translation, first in a four-part series, will appeal to those seeking adventure, strong friendship and survival stories at a lower reading level than usual