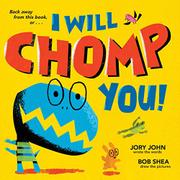 I WILL CHOMP YOU!

Never mind a monster at the end, there’s a monster all the way through this book!

Starting on Page 1, the protagonist monster uses direct address to warn readers not to turn any pages. The book’s very title reveals the threat behind this warning, and Shea’s toothy monster—all mouth and head and bluster—seems ready to follow through with it. Disobeying the command provokes metafictive peril as warnings to readers persist, and various small creatures depicted on the page (a bird, a frog, and a wee bunny) flee its chomping jaws. The monster misses both them and disobedient readers, growing increasingly angry. Clever illustration choices make it seem as though the monster has chomped through the pages of the book, and soon its commands devolve into pleading. Why? “It’s because I have all my cakes back here, at the end of the book,” the greedy monster explains. In a fiendish ploy to trick readers, the monster offers to share, saying, “just come a little closer…” and a page turn reveals (yet another) “CHOMP!” Defeated, the monster resigns itself to readers’ progress toward the end of the book, and it chomps up all the cakes, leaving it with the just deserts of a bellyache. Throughout, Shea’s vibrant, silly pictures diminish the scariness of the story’s premise and deliver humorous characterization.