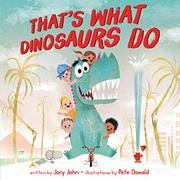 THAT'S WHAT DINOSAURS DO

When a T. Rex gets a sore throat and cannot roar for one whole week, his self-control is tested.

William loves to roar. But not just for the sake of making loud noise. He loves hiding, sneaking, and scaring, along with roaring. He can’t help it. As the titular refrain explains: “That’s what dinosaurs do.” Oswald’s blue-dappled, toothy dino peers out from behind bushes, frightening folks in literally hair-raising fashion (even the sheep that he scares have their wool standing on end). But when the doctor tells William he must rest his voice in order to cure his sore throat, he doesn’t know how to act. He wraps a big roll of gauze around his snout and slumps through town, dejected. It’s not very much fun for William, but the townspeople are ecstatic. No more roaring! No more scaring! But will William be able to keep it up? Though moments of growth are present (William does recognize that he shouldn’t scare others), readers may be taken aback by the unabashedly unapologetic prehistoric creature’s resistance to rehabilitation. Instead of reaching for a clever way to impart wisdom, John leans heavily on the excuse, “That’s what dinosaurs do.” William is a bully, with no hope of reformation.

It’s got witty illustrations, but it paints a pretty bleak picture for society.