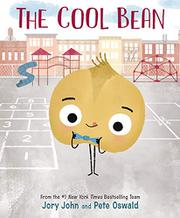 From the Food Group series

A supposed “has-bean” shows that coolness has more to do with deeds than demeanor.

Offering further moral instruction in this leguminous cousin to The Bad Seed (2017) and The Good Egg (2019), Oswald portrays three beans—each a different species but all sporting boss shades, fly threads, and that requisite air of nonchalance—bringing the cool to streets, hallways, playgrounds, and Leguma Beach. Meanwhile, a fourth (a scraggly-haired chickpea), whose efforts to echo the look and the ’tude have fallen flat, takes on the role of nerdy narrator to recall “olden days” when they all hung out in the same pod. Still, despite rolling separate ways (nobody’s fault: “That’s just how it is sometimes. You spend less time together, even though you’re not totally sure why”), when the uncool bean drops a lunch tray, skins a kid knee on the playground, or just needs a hint in class, one of the others is always on the scene toot suite. No biggie. And passing those casual acts of kindness forward? “Now that’s cool.” John’s good-hearted text makes some hay with the bean puns while Oswald’s pipe-stemmed limbs, googly eyes, and accessories give these anthropomorphic legumes lots of personality. As a fava to young audiences, pair with Jamie Michalak and Frank Kolar’s Frank and Bean (2019) for a musical combination.