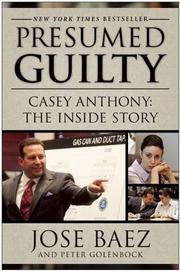 Casey Anthony: The Inside Story

by Jose Baez and Peter Golenbock

Anthony hired Baez in 2008 to defend her against allegations of child neglect of her daughter, Caylee. At the time, Baez, assisted in this memoir by Golenbock (Glory in the Fall: The Greatest Moments in World Series History, 2010, etc.), was just a "rookie lawyer" who had only been admitted to the Florida bar in 2005. What seemed like "just another case" quickly emerged as a possible murder trial. Complicating matters was the fact that investigators caught Anthony telling elaborate, and ultimately untrue, stories about her life that made references to a host of imaginary friends and acquaintances. Consequently, on the basis of unsubstantiated evidence Baez believes Orlando police leaked to the media, the legal system sought to convict the young mother “in the court of public opinion.” Using her apparent untrustworthiness as its point of departure, the prosecution proceeded to build a case against Anthony based on appearances rather than truth. It claimed that Anthony had done nothing but party for a month before finally admitting that her daughter was missing; that the smell inside Casey's car came from human remains rather than the decaying pizza remnants actually found in the vehicle; and that hair discovered in the trunk came from Caylee's dead body. Sensing that the case was not as simple as the prosecution had made it seem, Baez slowly gained Anthony's trust and pursued hunches that she was not only innocent, but also the victim of sexual abuse.

The author’s determination to complete a case that at times drove him to despair and brought him to the edge of bankruptcy is admirable, but the meticulous detail occasionally verges on excruciating.