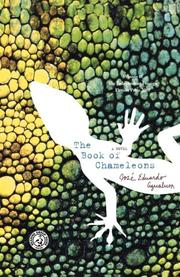 THE BOOK OF CHAMELEONS

Black is white and human is animal; appearances are deceiving in this subtle, beguiling story of shifting identities, the first U.S. publication for the Angolan author.

The narrator is a gecko who was an ancient human before becoming trapped in a lizard’s body. In Luanda, Angola’s capital, he shares the home of Félix Ventura, an albino who would be black if he had more melanin. Ventura, an animist, regards the gecko as his best friend and talks to him frequently; they even appear in each other’s dreams. The two form the novel’s central relationship. The albino was abandoned on the doorstep as a baby, and raised by the sole inhabitant, a mulatto secondhand book dealer who hightailed it to Lisbon after Angola’s independence. In this world of paradoxes, it’s fitting that the foundling should become a genealogist, creating family trees and impressive pasts for insecure arrivistes. His latest client is a middle-aged white man, a war photographer. Ventura gives him a name (José Buchmann) and a mother who was an American artist, whereupon Buchmann becomes intent on tracking her down. A parallel story line has Ventura courting a beautiful black woman, Ângela Lúcia. The mood is gentle and inward-looking, but can the city be kept at bay? For this is Luanda, a place still haunted by a ruinous civil war, where the personal is entwined with the political. Buchmann brings back the terror. He has been photographing a crazy old homeless man, his adversary, it turns out, from the revolutionary past, which also spawned Ângela. The three confront each other in a violent denouement in Ventura’s home, as the albino looks on horrified. Maybe the narrator’s mother was right to advise her son: “Given a choice between life and books…you must choose books!”

Agualusa’s novel, which has roots in the magical realist tradition, is a sui generis work, refreshingly different, owing its primary allegiance to a specific time and place.