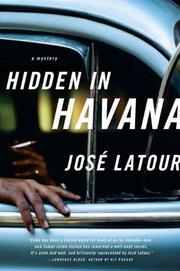 Tourists Marina and Sean, out for a jog in Havana, are forced to stop when Sean gets dizzy. The two take refuge in the home of pretty Elena Miranda and her sleazy relative Pablo. Sensing their wealth, Pablo agrees to accompany the couple on a night out on the town. After dinner at an elegant restaurant, Sean begs off a late-night foray into Havana’s tenderloin district. Marina and Sean are not who they appear to be: Sean passes information to a large man named John who’s been hanging out on the street. When the couple vanishes, John steps in where Sean had demurred, allowing Pablo to shepherd him to some X-rated entertainment. The tables are turned when John brutally kills Pablo, tearing a chunk of flesh from his neck with his teeth. The case falls to wry, methodical Captain Felix Trujillo, who proceeds pro forma until he learns that Pablo was not only a petty criminal with an addiction to illegal pornography but the son of an infamously brutal general who has racked up an impressive list of enemies via torture. Trujillo finds himself following leads in all directions, including a most unlikely (or is it?) yarn involving buried treasure.

Latour (Comrades in Miami, 2005, etc.) combines a unique understanding of contemporary Cuba with a lean, muscular style. The result is top-notch crime fiction.