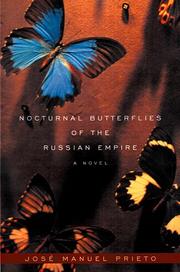 NOCTURNAL BUTTERFLIES OF THE RUSSIAN EMPIRE

Vladimir Nabokov, wherever he is now, is either chuckling uncontrollably or purple with indignation over this delightfully tricky first novel by a young Cuban writer. The narrator, identified only as “J.,” is a resourceful Eastern European smuggler whose commission to hunt down and bag a rare species of Russian butterfly involves him with “V.” (for Varia—a richly suggestive moniker), a mystery woman whom he meets in Istanbul, loses in Odessa, and pursues through an enigmatically dippy correspondence in which he imagines himself another Abelard seeking his unattainable Héloise (among other storied predecessors). A charming original: a comic portrayal of obsession with an edge of harsh post-Communist realism. It’s as if Thomas Pynchon, Graham Greene, and Milan Kundera had collaborated with Nabokov on a script for Woody Allen.