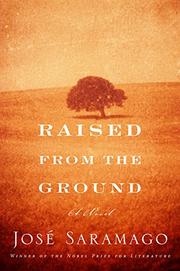 RAISED FROM THE GROUND

An early, epic novel by the late Nobel Prize winner, for completists steeped in knowledge of the author’s work and his native Portugal.

Though this novel won the City of Lisbon Prize upon publication in 1980 and has since been praised as both seminal stylistically and deeply personal, this translation represents its first publication in English, more than three decades later. And even fans of the fables and parables of Saramago (Blindness, 1998, etc.) will likely find the novel a mixed bag, with flashes of brilliance offset by stretches of tedium, amid oblique references to Portuguese politics and culture that brief footnotes can barely illuminate. The novel encompasses three generations of the agrarian peasant Mau Tempo family, treated little better than cattle by the landowners who employ them. “These men and women were born to work, like good to average livestock,” writes the author, whose own family origins were similar. At times, the narrative slips into first-person from different characters, at other times, it offers the perspective of an ant, and yet other times, the distinction between the ant’s view and a human’s might be obliterated. Similarly, the authorial presence is very much in evidence throughout, with a droll tone, though the lack of any progress over the course of decades and generations seems tragic. “[W]e’re so used to laughter turning into tears or a howl of rage so loud it could be heard in heaven, not that there is any heaven,” he writes, of a conspiratorial exploitation that finds the church and government in league with each other, supporting the status quo, exercising power over the powerless. Even the natural order can’t provide solace, since “nature displays remarkable callousness when creating her various creatures.” As in the American naturalism of Frank Norris and Stephen Crane more than a century ago, the characters are but cogs in a big, cold machine, born to die but supplying their own replacements before they do.

A novel that offers insight into the renowned author and his native land.