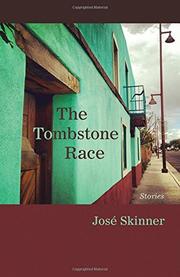 Like his contemporary Claire Vaye Watkins, Skinner (Flight and Other Stories, 2001, etc.) has a nuclear focus on a person's sense of self in the context of a physical place. He continues this style in these lovingly crafted short stories about the denizens of the desert Southwest. In “The Edge,” young Osvaldo and his crew of homies are partying at the edge of the Rio Grande Gorge when one of them falls into the canyon. Another story, “Solidarity,” bookends the male experience in a way. Two former campus radicals encounter each other during a job interview on campus only to discover how much old men change even while angry young men remain the same, often for good reasons. In “Looking Out," Skinner tackles the dangers of postmodern romanticism in depicting two young people talking about the sublime landscape around them. One asks the other, “If you woke up from your life, would you tell it as a beautiful dream, or as a nightmare?” If there’s a consistent theme throughout the collection it’s doubt in the face of one’s authenticity. Dedicated student Danny Sanchez loses his computer in “Backing Up” only to wonder if he deliberately set himself up to be drawn into gang life. In “Clean,” a junkie becomes so convinced of his own poisoned nature that, as his parole officer says, he just doesn’t know when to quit. It’s a photo album of desperate lives, but there’s a lot of poetry in the writing, too. In “My Dealer, In Memoriam,” a junkie considers his options after his dealer kicks it. “I’m going to have to start panhandling to scrape up enough change to score whatever filthy, stepped-on shit I can find on the street,” he tells us, knowing the score.

With verisimilitude, compassion, and a surprising amount of nobility, Skinner navigates the mean streets of New Mexico with cunning and grace.