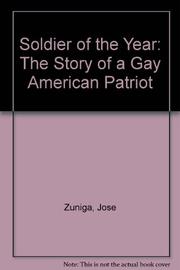 SOLDIER OF THE YEAR

The Story of a Gay American Patriot

The 1992 recipient of the Soldier of the Year award, who saw a brilliant Army career crumble when he decided to come out of the closet, breathlessly recaptures the events surrounding his sensational gesture. Zuniga comes from a family with deep roots in the US military; he clearly has great respect for the Army as an institution, with the exception of its ruling on homosexuals. His home life of military-style discipline is described affectionately and fairly, as is his successful career as an Army journalist. Boot camp at Fort Hood is seen as a period of exultant self-discovery. He did not find it difficult to maintain a clandestine gay lifestyle inside the Army, he says—in fact, most of his friends there were gay. We get interesting behind-the-lines scenes of the Gulf War, in which he served as a medic; he seems to stress his bonding relations with straight men as if to prove that sexual orientation did not interfere with duty. A turning point suddenly arrived when the predicament of a lesbian supply technician (sexually harassed and then dishonorably discharged at the harasser's instigation) aroused Zuniga's guilt at not announcing his own homosexuality. Transferred to San Francisco's Presidio barracks, he felt his double life ready to overtake him. He made his announcement on April 24, 1993, just four months after President Clinton's reiterated promise to lift the ban on gays in the armed services. Zuniga is a bit too taken with his own heroism here: ``I risked it not to become a Nelson Mandela or Andrei Sakharovtype figure in gay history,'' he says unironically, ``but because Silence truly does equal Death.'' That he did not, unlike those men, spend years in confinement for his actions does not, alas, seem to have occurred to him. Honest and emotionally charged, but marred by childish and clichÇd political rhetoric.