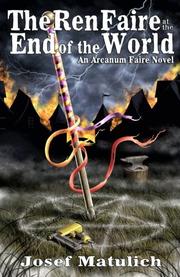 REN FAIRE AT THE END OF THE WORLD

In this final installment of a comical trilogy, a contractor faces zombies and other obstacles while trying to build a Renaissance faire.

Marc Sindri is constructing a permanent Renaissance faire in Arcanum, Ohio. Marc may be a skilled contractor, but his current assignment is anything but easy. To say that the work site has been awash with witchcraft, sex, and conflicting personalities would be an understatement. Book 3 begins in February, and with the planned opening of the faire in May, time is rapidly working against Marc. His first hurdle comes in the form of an angry phone call from one Jeremiah Stone II, who wants to know who stole his son’s body from the family mausoleum. Marc was certainly no friend of the caller’s son (also named Jeremiah), but he has nothing to do with the missing corpse. Marc soon finds himself fighting a reanimated version of the deceased in order to save his beautiful girlfriend, the witch Brenwyn. But this battle is merely the beginning of Marc’s struggles against the undead, as the area around the faire is infested with zombie rabbits and other unsettling creatures. Then there is the foreboding moment when, during a ritual between Marc and Brenwyn, it is predicted that the faire’s opening will be disastrous. Marc and his cohorts see themselves through their trials with abundant sexual innuendoes (one woman smiles at the idea of being “well-drilled”) and occasional wordplay (a character named Eleazer remarks: “I do not have a jealous bone in my body, milady, not even a bit of envious cartilage”). The result is a story that is more zany than clever, albeit with enough action to keep the wackiness from becoming dull. Whether it is naked witches performing a ritual or humans slashing at zombie animals, something is always happening. Readers may question certain details in Matulich’s (Power Tools in the Sacred Grove, 2015, etc.) novel, such as how Eleazer, who is supposedly successful at seducing women and uses terms like “milady” constantly, can talk to anyone without getting a good thrashing. But whether or not the faire comes together as a great success or failure, there is excitement in finding out how all the dust (and blood and amulets) will settle.

PHANTASY—LAND OF THE BEYOND
by Just Dave
Indie