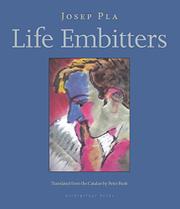 Pla (The Gray Notebook, 2014, etc.), the late Catalan pessimist, is given another airing in English thanks to the efforts of his dogged translator, Bush.

Gone 35-odd years now, Pla gave Romain Rolland a run for the money in the prolific department: when he died, he left behind more than 30,000 pages of published work and many more unfinished and uncollected pages as well. The present work, published as La vida amarga in 1967, continues Pla’s long project of creating a literature of real-world description, blending history, travelogue, memoir, and journalism. Pla as narrator is ever present, but if he’s a moody and brooding sort, his gaze is seldom trained inward and is certainly not self-pitying; he’s busy looking across the table at the bistro or, more often, the boardinghouse and wondering who those strange people are and why they think and act as they do: “Two words and he’d already slipped up and, trembling and blushing, he sputtered out strange drivel. The landlady would silence him with a withering look. The others dared not laugh or speak. They lowered their eyes in dismay, as if suffering a great calamity.” “The waiter had thought profoundly about tourism, and the conclusions he’d drawn had led him to admire artists boundlessly.” Moving around the capitals of Europe in a time of depression and unremitting melancholy, Pla often serves up small moments of perhaps unintentional brilliance, as when he puts felines to work for political ends: “In this household, Frau Behrends and the cat represent the past, tradition, and order; Roby and the kitten, the future, revolution and instability.” About all that’s missing from this sprawling narrative of vignettes and sharp aperçus is a sense of the author, who sometimes remains hidden; a circumstantial introduction, especially addressing Pla’s politics in that most political of times, would have been very useful.

Students of Orwell’s journalism and of Kapuscinski will be glad to discover Pla, whose melancholy resembles that of his contemporary Stefan Zweig—and for some of the same reasons.