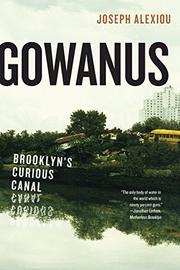 The history of a Brooklyn neighborhood and its fetid canal.

The Gowanus Canal was created in the mid-1800s by enlarging an existing creek, creating a passageway nearly 2 miles long from the Upper Bay into Brooklyn for commercial shipping. Because the city has always tried to handle drainage of the surrounding marshy areas and local sewage disposal on the cheap, it has also been an open sewer for more than 150 years. In this debut history, Time Out New York associate editor Alexiou claims, "the Gowanus is a microcosm—a lens through which to view the passage of history, and in particular the growth of Brooklyn and its unique identity in relation to its environs." He accordingly recounts the entire history of the creek, canal, and neighborhood from its earliest settlement by the Dutch to the present day, including the development of the canal and industrial Brooklyn in the 19th century and the neighborhood's decline in the postindustrial second half of the 20th century. The canal was designated a Superfund site in 2010, and the neighborhood is enjoying a renaissance of small-scale development and gentrification. Alexiou's narrative is well-researched and moves along in a confident and lively manner, but it suffers from a lack of focus. The author presents an unusually well-defined case history of the interaction of the private and public sectors generating growth and prosperity through a unique piece of urban infrastructure at a terrible environmental cost that still has not been fully addressed. However, Alexiou makes room for extensive sections on the Battle of Brooklyn in the Revolutionary War, the personal struggles of developer Edwin Litchfield with the city, amateur baseball, and organized crime wars in Brooklyn, all colorful and legitimate topics for a local history but distractions from a central theme that the author leaves largely implicit.

This thorough, overdue, rambling history reaches for special significance but fails to grasp it.