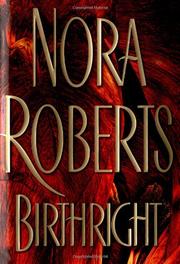 Archaeologist finds a lost tribe: hers.

Callie Dunbrook goes up against developer Ron Dolan, whose housing project has come to a halt because a bulldozer uncovered human remains. Though the site is near Antietam, Maryland, the bones predate the Civil War by thousands of years and are most likely from the burial ground of an unknown Neolithic tribe. The authorities force Dolan to lay off his crew, whose workboots and carelessness have already contaminated the site, before more damage is done. An excavation is planned, a process that will take months. So Callie makes the local news—and her face is seen by Suzanne Cullen, who’s sure that Callie’s triple dimples are identical to those of her long-lost baby girl. The sleeping infant was snatched from her stroller at a shopping mall only a few days after Callie was born, and, paying an unexpected visit, Suzanne insists that Callie is her child. Knowing that Suzanne is the CEO of a national firm reassures Callie that the woman is not a crank—though wrong. But a peek into a desk at her parents’ house uncovers adoption papers dated two months after her mother’s devastating miscarriage and a few days after little Jessica Cullen disappeared. Callie confronts her parents, who fess up at last, though insisting that the adoption was perfectly legal. Marcus Carlyle, a distinguished Boston lawyer, had arranged everything. He couldn’t possibly be a baby-seller and certainly not a kidnapper. Or could he? Callie looks for clues, with the help of her sexy ex, Jake Graystone. The trail leads back to nosy Nurse Poffenberger, who tells all; and then to Richard Carlyle, Marcus’s equally distinguished son, who isn’t talking. The plot thickens, with suspects appearing—and supporting characters disappearing—as fast as mechanical ducks in a shooting gallery.

THE SECRET GOSPEL OF MARY MAGDALENE
by Michèle Roberts
Fiction

READER, I MARRIED HIM
by Michèle Roberts
Fiction

THE MISTRESSCLASS
by Michèle Roberts
Fiction