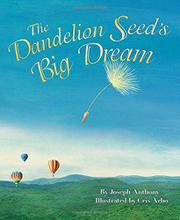 Floating off under its parachute, a dandelion seed makes a difficult journey and lands in an unpromising place, but in the end, it fulfills its dream of making flowers of its own.

Anthony and Arbo turn the journey of a familiar weed seed into a parable of perseverance. Detailed pencil-and-paint illustrations show the tiny seed floating off from the lush green countryside and soaring over what appears to be a college town. (Just to underscore the mechanism, hot air balloons are depicted making a similar journey.) But the town buildings and streets, though nearly empty of humans and cars, are not hospitable. There’s a sticky spider web, a woman with a broom and a cavernous parking garage. The seed ends up in a discarded yellow Styrofoam container on a trash-filled lot. Winter comes and goes. In spring, an ethnically diverse cleanup crew transforms the area into a community garden; the seed flourishes nearby. An afterword introduces this weed/flower, describing its parts, its history in North America and its potential for classroom studies of plant life cycles. Building on the pair’s The Dandelion Seed (1997), this glorifies the seed’s patience and persistence, and it makes clear that this well-known plant can be much more than a weed.

A simple story with more than one message.