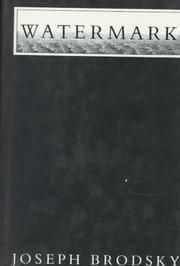 A very, very short prose-exercise by Nobelist Brodsky about Venice, his many wintertime trips there, the enchantment and ironies and visual splendors. Brodsky has piquant ideas about space and time (see Less Than One, 1986) that lend interesting angles to his Venice-for-visitors: ideas about water, light, brick (``an alternative order of flesh, not raw of course, but scarlet and made up of small, identical cells. Yet another of the species' self-portraits at the elemental level, be it a wall or a chimney''). He finds himself one evening in the company of Olga Rudge, Ezra Pound's companion, which engenders a wonderfully European assessment of Pound: ``For someone with such a long record of residence in Italy, it was odd that he hadn't recognized that beauty can't be targeted, that it is always a by-product of other, often very ordinary pursuits.'' Brodsky writes poetically of winter light: ``And the city lingers in it, savoring its touch, the caress of the infinity whence it came. An object, after all, is what makes infinity private.'' When he's setting up to make aphorisms like this, Brodsky sails along. But even in such a tiny book he can't always be doing that; and when he isn't, he writes personally, with an air of swagger, lechery, and disdain (for homosexuals in particular, it seems) that makes his meditations seem more crotchety than anything else: Venice gets lost in the fog.